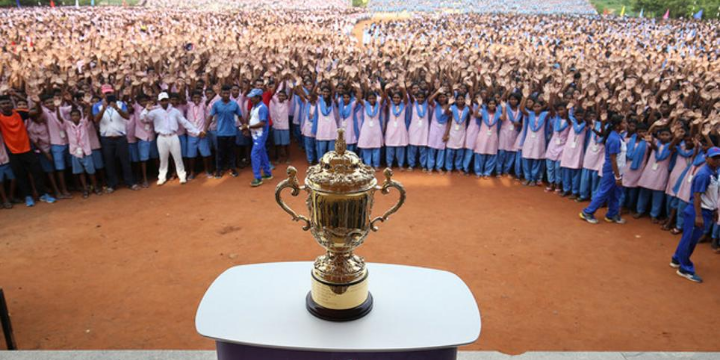 The huge potential for the growth of rugby in India was demonstrated by an unprecedented level of engagement with the Rugby World Cup 2019 Trophy Tour during the first visit of the famous Webb Ellis Cup to the world’s second most populous country last week.

The Webb Ellis Cup enjoyed a high-profile and impactful visit to India as 18,800 participants directly interacted with trophy tour events in Delhi, Mumbai and Bhubaneswar during an action-packed five-day trip from 6-10 August.

The trophy tour included trips to three of India’s most iconic landmarks, including the world-renowned Taj Mahal, and received strong support from the stars of Bollywood and Indian film in the shape of actors and rugby fanatics Sidharth Mahotra and Rahul Bose who shared the inspiration of the Webb Ellis Cup with their cumulative social media audiences of more than 12 million.

Some of India’s most high-profile sporting legends also got behind the rugby initiative as cricketer Debashish Mohanty, winner of 47 caps, three-time Olympian and former Indian hockey captain Dilip Tirkey and former women’s football captain Sradhanjali Samantray lent their support on the final day of the trophy tour in Bhubaneswar.

World Rugby Chief Executive Brett Gosper participated in the Delhi and Mumbai legs of the trophy tour and was impressed by the exceptional level of interest and enthusiasm for rugby in India: “Bringing the Webb Ellis Cup to India for the first time has been the catalyst for a breakthrough moment for the game in terms of political interaction, fan engagement and media exposure. We have witnessed unprecedented interest in rugby being ignited in this country of 1.3 billion people and a great sense of momentum building, as demonstrated by the record breaking turn out of over 15,000 schoolchildren in Bhubaneswar and the support received from the stars of Bollywood and other Indian sporting legends.

“We were very encouraged to listen to the Sports Minister speak of the potential for growth of rugby and perhaps the most pleasing aspect of the tour was to see first-hand that rugby in India is being embraced by players and fans from all backgrounds and social classes, in keeping with World Rugby’s ethos of a game for all.

“Thanks to the hard-working efforts of World Rugby’s partners in Asia Rugby and Rugby India the platform is set for the first Rugby World Cup in Asia next year to be a game-changer for the sport in this region, which has such huge growth potential. Our challenge now is to ensure that the seeds planted during this ground-breaking trophy tour are given every opportunity to develop in future.”

The last two years has seen the biggest growth and development of rugby across the country with India ranked first in Asia and third in the world in terms of participation numbers through World Rugby’s Get Into Rugby mass participation programme by reaching more than 160,000 participants, with 40 per cent female in 2017.

Meanwhile recent research conducted by Nielsen has found there to be an existing rugby fanbase of over 25 million in India, the third largest in the world behind USA and China, demonstrating the potential that exists for further engagement with the game.

Continuing the commitment to grow the game, Rugby India used the inspiration of the Rugby World Cup 2019 Trophy Tour as an opportunity to reach more than 54,000 new rugby participants as part of a dedicated nationwide engagement campaign which ran from 1-15 August, culminating on Indian Independence Day. The activation involved strong collaboration with zonal, state and district associations, clubs, schools, universities, colleges, communities, corporate partners and volunteers and represents India’s biggest single Get Into Rugby activation to date.

Mahesh Mathai, Secretary General Rugby India, said: “In celebration of the Rugby World Cup trophy tour to India, I am pleased to inform that Rugby India has been successful in reaching out to 54,680 new participants as part of the Get Into Rugby ‘Project 50k’ which was rolled out earlier this month. With the National School Games and University Games in sight, these new players will have an opportunity to showcase their talent and compete at the highest level. As the trophy departs from India, I would like to wish World Rugby all the very best for the remainder of the tour.”

The Trophy Tour now moves on to Japan for a three-month domestic tour incorporating all 12 Rugby World Cup 2019 host venues, starting with the official opening and inaugural match at the Kamaishi Recovery Memorial Stadium on 19 August ahead of the one year to go countdown and celebrations in September. To view the Rugby World Cup 2019 Trophy Tour schedule visit www.rugbyworldcup.com/trophy-tour.

World Rugby aims to attract and retain one million new players in Asia by 2020 through the Impact Beyond programme and the trophy tour plays an important role in engaging new and existing rugby players and fans around the globe ahead of Japan 2019, the first Rugby World Cup to be held in Asia.