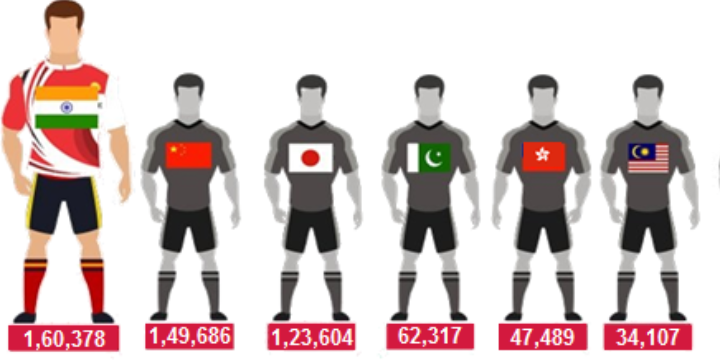 India Ranks 1st in Asia and 3rd Globally as per Get Into Rugby Statistic Report, 2017

2017 was a great year to "Get Into Rugby" indeed!! Rugby India, Ranks first in Asia and 3rd Globally for participation Numbers through GIR!

As per the World Rugby’s Get Into Rugby (GIR) Statistic report 2017, India finished in 1st position in Asia to have seen highest participation in the GIR programs and came in 3rd position globally.

The Indian Rugby Football Union (IRFU), aka Rugby India, introduced the ‘Get into Rugby’ program in 2012- a World Rugby initiative, to promote and grow the sport globally. The program is focused on introducing Rugby, the sport to enthusiasts and throw light on the values of the game - Integrity, Respect, Solidarity, Passion and Discipline, which inspire millions of kids to choose and play the game globally.

Mr. Mahesh Mathai, Secretary General, Indian Rugby Football Union said, “The GIR initiative has given Rugby the much needed push in India. We are extremely positive and ambitious about seeing huge growth of Rugby in India through the GIR platform. When it comes to growing rugby nationally, resource and fund allocation remains to be a deterrent. Thanks to Societe Generale and their cooperation, we can now participate in international Age grade rugby tournaments which will ultimately help us popularize the sport and build a strong national team to compete at a global level.”

Mr. Nasser Hussain, General Manager, Rugby India said, “We have received overwhelming response to GIR in the Age grade categories across the country. This initiative has also helped us find some very talented and passionate players, who are making us proud by competing and achieving accolades at international levels. In the month of November, the Indian U18 Girls team participated in the at the Youth Olympic Games Qualifiers in Dubai and finished in 4th Place out of 12 Asian Countries”.

Societe Generale is also assertively supporting the ‘Get Into Rugby’ program, an initiative aimed to harness the potential sports talent from the grassroots in the country, especially at locations where resources are limited. Through this initiative, Societe Generale is committed to make Rugby accessible to everyone and build a strong national team to compete at the global level.

Through the 3 stages of Get Into Rugby program implemented across India, schools have been able to gradually progress to 7-a-side rugby in the last few years. The players who represented their schools in the first two phases (TRY and PLAY phases of the GIR program) can then move to the third phase and get selected to play for their district and their state (STAY phase of the program).