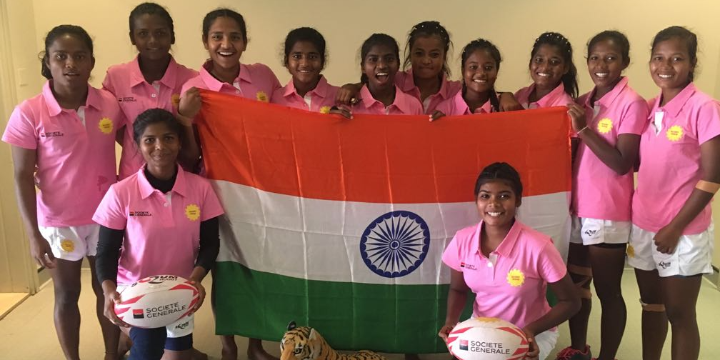 The Indian U-17 Girls Rugby team competed at the Asian Qualifier for the Youth Olympic Games Rugby Sevens Championship which was held at Dubai Sports City, Dubai, UAE on 29th & 30th of November, 2017. The team was supported by Societe Generale, the financial partner of Rugby India and is participating under the aegis of the Indian Rugby Football Union (IRFU), the governing body for the sport of Rugby in India.

This Asia Rugby tournament also served as the Qualifiers for the 2018 Youth Olympic Games to be held in Argentina. A total of 12 countries from across Asia including Japan, Laos, Kazakhstan, Iran, Hong Kong, Sri Lanka, Philippines, China, Thailand, Malaysia, India and hosts U.A.E fought for top honors at the championships in Dubai.

The Indian Junior Girls Rugby team has been in preparation for over a year in the lead up to this prestigious tournament. Most of these girls participated  the Inaugural Asian U18 Girls Rugby 7s, held on 30th November to 2nd December 2016 at the Dubai Sports City, UAE wherein India secured bronze beating Sri Lanka last year. In addition to this, the Indian Junior Girls’ Rugby team also participated and finished fifth in the Paris World Games 2017 held in France on 8th  - 9th July 2017 in the U18 Girls category.

For the Asian Qualifier, the players shortlisted to join the Indian National Training Pre-Camp were selected during the Societe Generale Junior National Rugby Sevens Championship, which was held at the Jawaharlal Nehru Stadium in Chennai on 10th & 11th of June 2017.

Post the Junior Nationals, Rugby India hosted a Pre Selection Camp was held in Kolkata from 1st October – 14th October 2017 where a total of over 40 girls were put through the paces.Post the pre-camp; the best 20 girls were invited to join the National Training camp, which was held at the Bombay Gymkhana, Mumbai from 5th November to 28th November 2017.